Vince Bardot was born 9/8/62 and raised Roman Catholic in the St. Louis, MO area.  He was taught to have a reverence for God, the Creator of Heaven and earth, from his childhood. He fell away from his religious faith during his college years; early in the 1980s. In 1996, he moved to a small town south of St. Louis. He eventually was called back to his faith, and accepted the Lord in January of 2002.  He met his wife, Tracie, in October of 2002, and through the Christian faith of Tracie, was subsequently drawn away from Catholicism into the non-denominational Christian faith.  He was blessed by God, they married in June of 2003 and he became a husband and step-father, daughter Ramie, at the age of 40.  He was baptized in 2005. He attended Church and Bible Studies, was a greeter/usher, and was cook for the Men’s Monthly Breakfast/Bible Study at his Church.

Tracie Bardot was born 11/26/61 and raised Baptist in a small town just west of St. Louis.  She moved to the Houston, TX area in her late teens.  She fell away from her religious upbringing at this time, but was called back to her faith and accepted the Lord in April of 1999 and was baptized.  She was a member of a non-denominational Church in Houston, until she moved, with her daughter Ramie, to a small town south of St. Louis in 2000.  Tracie attended Church, Bible Studies and Women’s Bible Studies throughout her walk with the Lord.

In 2006, Tracie and Vince were drawn by God into the Hebrew Roots of their faith. They began obeying Shabbat and all of the Feasts of YHVH with another couple as the Ways of God were revealed to them.  They attended a few Hebrew Roots Conferences, listened to Hebrew Roots teachings, studied the Torah/Bible in their small group and grew to love the nation of Israel over the years of this new walk with God.  They were each baptized in the Holy Spirit in 2008. They had a desire for a Community environment which was obeying and teaching the Hebrew Roots faith, but a Community was not to be found in their area of Missouri. By the mercy and grace of God, Vince began to write teachings of revelations he received through the Holy Spirit about living in obedience to the Word of God during this “Age of Sanctification”. In 2011, Vince accepted a new job in Cedar Rapids, IA and they consequently moved there; leaving behind their daughter, son-in-law and three grandchildren.  They continued obeying Shabbat and the Feasts of YHVH, but were struggling spiritually not truly having any Hebrew Roots Community involvement.  Their faith in God was solidified per the Torah verse in Exodus 19:5 “Now, if you will pay careful attention to what I say and keep my covenant, then you will be my own treasure (segulah) from among all the peoples, for all the earth is mine”. At the Feast of Hannakuh in 2014, they met Pastor Tikvah and Tim, and a relationship that was ordained and blessed by God began. Together, they celebrated Shabbat and the Feasts of YHVH, until the vision of the Beit Tehila of Iowa Community in Cedar Rapids was birthed.  The prayers of Vince and Tracie for a Hebrews Roots community were answered and they were anointed to be Elders of this Community. They are so joyful and humbled to be able lead and serve this Community with the blessed gifts they have received from God. Yeshua said in Matthew 20:26 “whooever among you wants to be a leader must become your servant.” In 2016, their faith in God and Yeshua was strengthened immensely when they made their first visit to the Land of Israel for the Feast of Tabernacles.

Tracie has a loving heart beyond most and a special gift from God to minister to her brothers and sisters in the Messiah through hospitality.  She goes above and beyond to try to make everything perfect for everyone at Shabbat Services, Feast gatherings, and Fellowship dinners.  She loves worshipping the Lord through dance, she loves Israel and her spirit has been revived through the Beit Tehila of Iowa Community.  She attends the weekly Women’s Bible Study and the weekly Torah Study.

Vince has a heart for Israel, loves his brothers and sisters in Messiah and loves the Word of God; the Torah and the complete Bible.  He listens for the Voice of God as he reads and studies the Word of God daily, and has been anointed as a teacher of the Word of God.  He loves to teach about Fearing the Lord through obedience, reverence and holiness.  His heart’s desire is to lead others to glorify God through the “love language” of God; obedience. Vince leads the Monthly Men’s Meeting and aids in leading the weekly Torah Study.

Timothy and Tikvah have been walking and serving God as believers in Yeshua (Jesus Christ) for over 40 years. In those years of growing in their faith the doors of ministry have opened up to them in Cedar Rapids, Iowa to be servant leaders to a new community. This community is a sister congregation to the first one located in Brandon, Florida.

Tikvah began dancing for the Lord in 1991 and soon after, became the founder and leader of “Tabernacles of Praise Dance Ministry.”  With her new found joy and freedom that came with praising God in the dance, Tikvah felt the call of God to share this joy with others and to teach them to worship God in spirit and in truth. Not only is she a teacher of the truth of God’s Word, but also instructing thousands in dance along with implements of worship (flags, banners, tambourines, and shofars). One way she has reached the masses is through two instructional dance DVD’s available to help those who are feeling the call to dance; “Praise Him with Dancing” and “Dancing through the Feasts in Israel”.  She has an anointing to speak to people about the love of God, the way of salvation and the Hebrew roots of regathering and restoration!

From this ministry, Beit Tehila Congregation (Hebrew for “House of Honest Praise”) was birthed in 1996. Tikvah and her late husband Pastor Randy Dryer (who went home to be with the Lord after 25yrs of marriage) were the founders and Pastors of this congregation.  Not only was she a Pastor and dance leader at Beit Tehila, she also ministered in many other ways including leading the woman’s ministry, offering personal one-on-one discipleship to women, coordinating and organizing all the feast events and celebrations; and hosting annual community Passovers. Tikvah was the visionary and organizer of 10 years of “The Restoration of the Tabernacle of David” conferences that people from all over the world attended. She and the dance team were sent out to minister at conferences, churches, nursing homes and mission trips ministering the Word of God with dancing in a manner that is pleasing to God.  Dear to her heart is organizing and hosting annual trips to Israel since 1996. She has had the blessing of visiting Israel over 20 times.  God has revealed to her the connection between the people of Israel, the land and how it relates to us as New Covenant believers in Yeshua.

Tikvah remarried in 2011 to a wonderful man of God, Timothy Kolbo.  A man that is also full of the Spirit of Faith! Timothy has been faithful to the call of God on his life by sharing the simplicity of the Gospel through his 40 years of seeking and serving God! Actively serving God in the community through youth, serving on church board and presently sharing God’s Word through media. He is an elder in the Faith, full of wisdom to minister to the body of Messiah. Timothy and Tikvah together are blessed with three sons, two daughters and twelve grandchildren! Together, they make a great team of bringing faith, healing and restoration to the body of Messiah!

Tikvah’s son-in-law and daughter (Pastor Nick and Danielle Plummer) have continued the Beit Tehila ministry in Florida along with Tikvah’s, other son-in-law and daughter (Pastor Russell and Dina Messer) serve over the multi-media team, expanding the Hebrew roots of the Christian faith via the internet. Together, they all have the same vision, which is to see families restored by… rebuilding the ancient ruins, raise foundations from ages past, and be called “Repairer of broken walls, Restorer of streets to live in.” Isaiah 58:12 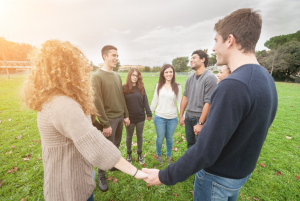 Then He said to His disciples, “The harvest is plentiful, but the workers are few. 38 Therefore pray to the Lord of the harvest that He may send out workers into His harvest field.” Matthew 9:37-38

There is a growing number of hurting people in our world today and it is our responsibility as a strong community to show God’s love through His word and deeds. We are praying and believing the Father for servant leaders (workers) who’s heart is to serve God and His children with the supply they have been so graciously blessed with!